Last year was difficult for all of us, and I’m hopeful that 2021 will bring our country, and our communities, back together.

I’m also hopeful that it will give me the chance to see and hear from you. You shape the causes I fight for, and it’s thanks to you – and the incredible work that so many of you did – that Delaware has made real change in the last two years:

Now we’re hard at work passing new reforms to protect our neighbors, our kids, and our elections. Here are ten of my top priorities for 2021: 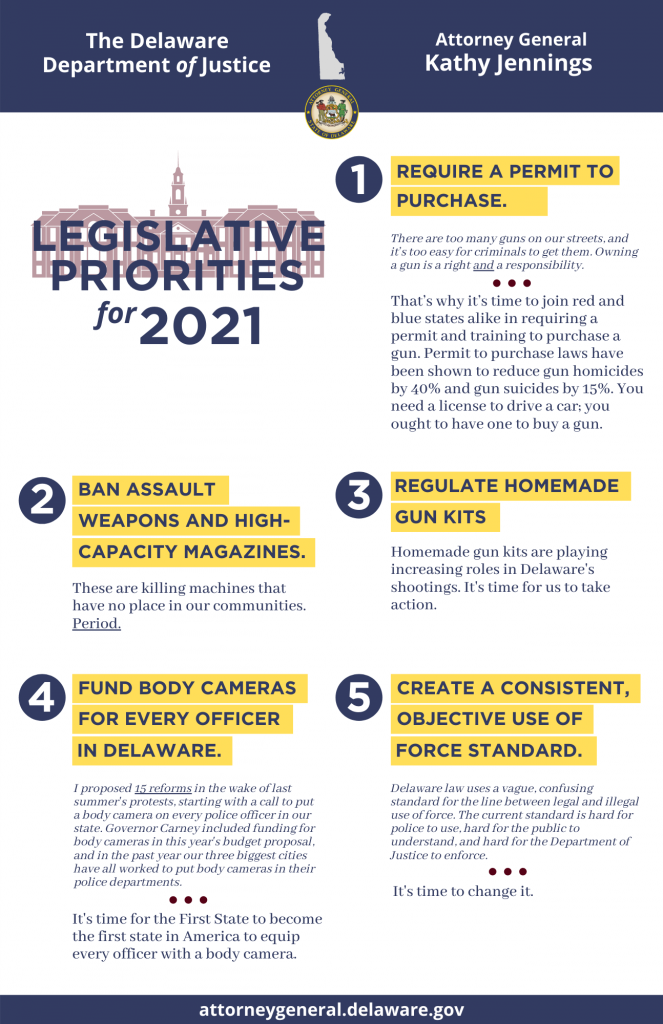 1. Require a permit to purchase a firearm

There are too many guns on our streets, and it’s too easy for criminals to get them. Owning a gun is a right and a responsibility. That’s why it’s time to join red and blue states alike in requiring a permit and training to purchase a gun. Permit to purchase laws have been shown to reduce gun homicides by 40% and gun suicides by 15%.  You need a license to drive a car; you ought to have one to buy a gun.

These are killing machines that have no place in our communities. Period.

4. Fund body cameras for every police officer in Delaware

5. Create a consistent, objective use of force standard

Delaware law uses a vague, confusing standard for the line between legal and illegal use of force. The current standard is hard for police to use, hard for the public to understand, and hard for the Department of Justice to enforce. It’s time to change it. 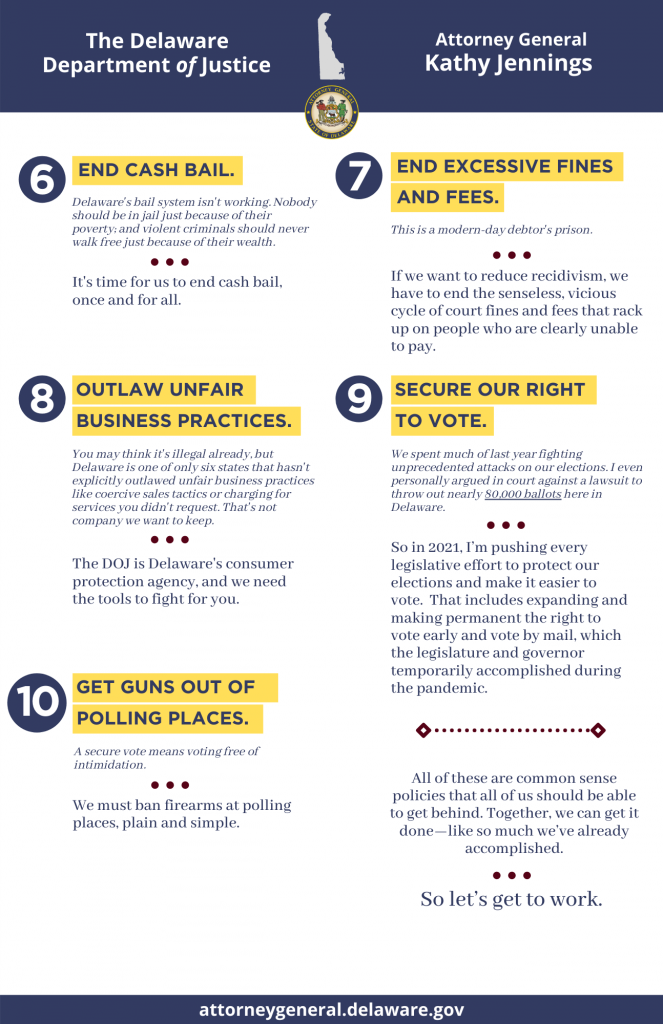 This is a modern-day debtor’s prison.  If we want to reduce recidivism, we have to end the senseless, vicious cycle of court fines and fees that rack up on people who are clearly unable to pay.

You may think it’s illegal already, but Delaware is one of only six states that hasn’t explicitly outlawed unfair business practices like coercive sales tactics or charging for services you didn’t request. That’s not company we want to keep. The DOJ is Delaware’s consumer protection agency, and we need the tools to fight for you.

9. Secure our right to vote

We spent much of last year fighting unprecedented attacks on our elections. I even personally argued in court against a lawsuit to throw out nearly 80,000 ballots here in Delaware. So in 2021, I’m pushing every legislative effort to protect our elections and make it easier to vote.  That includes expanding and making permanent the right to vote early and to vote by mail, which the legislature and governor temporarily accomplished during the pandemic.

A secure vote means voting free of intimidation: we must ban firearms at polling places, plain and simple.

All of these are common sense policies that all of us should be able to get behind. Together, we can get it done—like so much we’ve already accomplished.

So let’s get to work.